Pocket Change formed in 2016 in Wheeling, WV and is comprised of seasoned musicians with over a century of combined experience. Pocket Change plays rock, soul, r&b, funk, and blues hits from the 60s through today.

Book Pocket Change for your neighborhood party, club function, dance, or other event where you want great performers, classic hits, and a lot of fun. 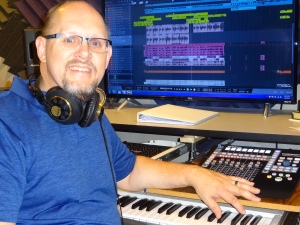 Shawn Caldwell, the newest member of Pocket Change, is a keyboardist/composer from Washington, PA and has been playing for over 45 years.

He graduated from Trinity HS in 1985 and is a 1990 graduate of Geneva College with a degree in Broadcasting. While in school, he began writing music, arranging and recording music, and playing in various bands. He is married and has 3 children.

Shawn teaches private piano lessons at both his home studio and at C.A. House Music in St. Clairsville, OH. He has been teaching for over 25 years and has been playing in church for even longer. He is currently the Worship Director at Living Stone Community Church.

Shawn’s second CD, “It’s Christmas Time” which released November 2018, is a collection of original, contemporary, and traditional Christmas songs – both with and without vocals. Check out www.shawnEcaldwell.com to hear snippets from Shawn’s albums, and to view lyric and music videos.

Erin Huffman is originally from Powhatan Point, Ohio and began singing in her hometown church at the age of two. It became a true passion as she was growing up as she participated in countless talent shows, theater productions and performances throughout the Ohio Valley. She honed her talent as a fine arts student at Mount de Chantal Visitation Academy, and upon graduating from high school she attended The American Musical and Dramatic Academy in New York City. She returned to the Valley in her early 20s and soon began working with bands such as Streamline, Easy Street, The Original Fantasy’s, The Experience and Black Slaney. After taking a 3 year hiatus from the bands in order to live and travel in Europe and Canada she is back in the Valley and pleased to be working with the talented musicians of Pocket Change.

Doug Baker joined his first working band while still in high school and has been actively involved in bands and music ever since. Over the years, he has covered just about every genre of popular music. “I’ve played in everything from country/variety bands to soul/funk bands and have benefitted musically from all of them. I think it’s important to keep learning and challenging yourself to be a better musician.” Early influences include Eric Clapton, B. B. King, Duane Allman, and Dicky Betts. More recently, session and solo artist Larry Carlton and blues/jazz guitarist Robben Ford have been very influential in his pursuit of a more jazz-based style. Doug’s musical credits include Oasis (variety/pop), East Coast Sensation (r&b/soul), The Martin Bros. (classic/southern rock), Nicky O’Grady (country/variety), and Picture Perfect (pop/jazz). “I’m very excited about Pocket Change. Every member brings a ton of talent and years of experience. I feel we’ve put something together here that’s very unique and exciting.”

Jim Glatzer brings over forty years of Bass playing experience to the band. “Bass is all I’ve ever wanted to play. A lot of guys start out on other instruments, and then switch to bass, not me. I have a long term love affair with the Low End. You hear the music, but you feel the Bass!” Early inspirations include James Jameson, Donald “Duck” Dunn, Chuck Rainey, and Carol Kaye. Jim has always been drawn to Soul Music, Jazz, and Blues, and brings a smooth, funky style to the band that pairs perfectly with Matt Harder’s drumming. Some of the bands Jim has played with are Oasis, Satin Finish, Foxfire, Blessings in Disguise, Shebang, and most recently, Picture Perfect. He was the Bassist for the Christmas Miracle Concert at the Capitol Music Hall, and has also been a Bassist at The Vineyard Church for 20 years. Along with his Pedulla 5 String Bass, he plays a 5 String Fretless Acoustic, and adds harmony vocals. Jim grew up in Bellaire, OH. He is married to the Love of his life, Shelley, and they reside in Moundsville, WV.

Dr. Matt Harder, drums, is professor of music at West Liberty University specializing in Music Technology. He directs the university’s recording studio and has also taught composition, music theory, music history, and percussion. Dr. Harder has been playing the tubs since 1984 and he is thrilled to be back behind the kit with a band after a long hiatus from rock drumming. You can occasionally hear Dr. Harder on the drum kit at the Vineyard Church in Wheeling, where he has been playing since 2006. Dr. Harder composes avant garde electro-acoustic and acoustic music and his pieces have been performed across the country. Please visit Matt’s personal website, matthewharder.com, to learn more about his mind-bending original music. Dr. Harder grew up in Chicago.